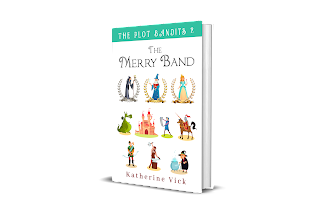 Ladies and gentlemen, I am pleased to reveal to you the cover of my approaching sequel to The Disposable . Brace yourselves for The Merry Band, coming August 2nd 2021! :)
Post a comment
Read more

Emotion and the Narrative – Feelings from Writing

May 02, 2021
Maybe it’s just me. It could be. A lot of things are. But does anyone else who writes out there sometimes find their feelings about a certain scene or story they’ve written can be unduly influenced by how they were feeling when they wrote it? Take Grim. Please. Yes, I know that sounds odd, to speak thus of one of the characters of my own work. But the trouble is – I associate him with trouble. I think I must have spent more time on that section of The Disposable , the scenes with Grim at his Fortress, than any other part of the book. Certainly, with only the possible exception of the opening of the second book of my trilogy (we’ll get to that some later day!), it’s the most rewritten and the most problematic scene I’ve ever written. Grim the Dark General has been through so many incarnations, so many different ways of responding and being that I honestly struggle to remember which one I ended up with. I’m still not even entirely sure to this day that it’s right. In my head, I’m not
Post a comment
Read more

April 14, 2021
Ask the Author – April 2021 My second round of Ask the Authors questions is this month’s offering to blogdom – please find the questions and answers below, I hope they pass muster! From Jeannie Ingraham If you didn't write fantasy, what other genre do you think you'd try?  I suspect I would be writing either science fiction or historical fiction. I know some people bunch scifi and fantasy in together but to me they are both opposite ends of the imaginative spectrum – science at the base of one and magic at the base of the other – while sharing the same creative new world-building-and-exploring traits. And in many ways, historical fiction, setting characters in a different cultural society and seeing how things pan out, is of a similar ilk – they all involve playing about in a world not quite our own. As a lover of geography, history and imagination, I need to have that kind of playground. I couldn’t write stories set in our own, ordinary, modern world – I prefer to sp
Post a comment
Read more

March 31, 2021
I firmly believe there is a book out there for everyone. The problem is finding it. I have to be honest and say I find it really hard to understand why it is some people don’t like to read. But I’m also well aware that’s because I was brought in a home full of books by a family of heavy readers and therefore to me, that was just normal. Books were a part of life. Everyone in my immediate circle always had at least one book on the go, be it fact or fiction, and my home was awash with crammed bookshelves. Reading was for fun. But I know that many others aren’t so lucky. That, to many, reading was nothing but a chore associated with school or something that through no fault of their own, they found difficult and frustrating. When reading is an activity only done in association with something dull or even despised, it becomes a symbol of unhappiness and displeasure, with no association with enjoyment whatsoever. I’m aware in this time of lockdown learning, many children learning from
Post a comment
Read more

March 25, 2021
https://www.thinklingsbooks.com/blog/new-books-are-springing-forth?fbclid=IwAR1osvidKI_9D_YB6TlGEChr3jNWDhSpGED14d5KSujY52eJpA1RMCU1xPY It is official - The sequel to The Disposable will be out later this year! Get ready for The Merry Band !
Post a comment
Read more

In Honour of Census Weekend

March 18, 2021
I actually wrote this as an office joke in honour of the previous census in 2011. To be fair, the tone of the 2021 census was slightly less militant than that one but I stand by being bewildered as to why the bloody hell they need to know my qualifications, means of getting to work, state of health and type of central flipping heating! In the olden days, they just wrote down who you were, where you lived, where you were born, what you did and if you were nuts and that just about covered it... This is your census speaking. You WILL complete every question. You will NOT skip anything. You will NOT make jokes. You will NOT say you're a bloody JEDI. You WILL read every line of every page and divulge every piece of information we ask of you or say goodbye to your house pet, sunshine. Answer and weep, suckers.... HOUSEHOLD QUESTIONS (Example selection) Can we see your house from here? Yes/No How many plug sockets do you have in your walls? How many are on average in use on the thir
Post a comment
Read more

Very Short Story - The Saga of the Hangover.

March 01, 2021
Ironically, I don't drink so have never experienced a hangover myself but I have been in the company of those who have and out of those observations arose the below. I wrote this short story for a writing group challenge years ago and for reasons I probably can't ever explain, I decided to write it in the form of epic prose. I'm like that...;) The Saga of the Hangover Once upon a time there was a man. This was not unusual. Nor was the fact that this man was holding a party, for twas his birthday and such things are often augmented by the copious consumption of alcohol. And lo, were a great variety of drinks clustered on his table together and lo, did he consume them and the world span greatly and he was glad and fell in a heap of joy. But upon the morn, the joy had departed from him. So, verily, had much self-respect, a copious volume of vomit and all of his brave companions of the night before. And lo, did he upon first waking and finding his eyelids glued to his eyeballs
Post a comment
Read more

February 18, 2021
I fell over earlier this week. Therefore this stream of consciousness ramble seemed an appropriate choice! To Fall What is falling? Is it the tumble, the lurch, the stagger, the stumble, the clumsy plunge earthwards with the mocking laughter of most witnesses ringing in your ears? Or the exhilaration of the dive, the rush of air past a body tumbling, with less control but more intent towards a death so certain but for a gathering of fabric released by a single yank on a cord? Is it the lurch in your stomach as only a quick grasp of a banister prevents a bruising bounce down a flight of stairs? Is it that bizarre sensation in the back of your mind as your gaze over a towering edge and just for an instant, you feel the urge to leap and fall forever? Is that falling? Or is it that scary/peaceful instant on the edge of sleep when you finally let go of consciousness and slip into your dreams? Is it the nod of your eyelids after a long day that steals great chunks of whatever unfortu
Post a comment
Read more

Poetry Attack - Ode to the Distance

February 01, 2021
I don’t write poetry very often, I’m neither particularly profound or talented in this area. But occasionally the urge takes me and it seemed the best way to say what I wanted to express. The below is the result. Ode to the Distance I’ve never minded being home It is my chosen place to roam To read, to write, to settle down There’s just no urge to be in town I’m fine to potter all alone To chat by email or by phone So it doesn’t feel that wrong I’ve been at home so very long But sometimes I will take a pause Confess to miss the great outdoors The street is grey, the park is tame Somehow it isn’t quite the same As roaming in the beauty wide As being in big countryside I miss a taste of mountain air To see a hill-swept vista fair The splash of wave on rocky shore A tumbling stream on lonely moor The brush of breeze through forest trees A windswept beach with rolling seas Skies that boil with light and shade Rain-washed clouds that pulse and f
1 comment
Read more

January 17, 2021
I found this short story written for a long ago online challenge, the prompt being "catastrophic". It seemed oddly appropriate to current circumstances. Even in the worst of times, there's always one...;) Catastrophic It had always been Jim’s biggest problem. He had to try and make the best of things. The cave – for that was all the name one could really use for the remains of this deep Underground tunnel with its broken rails and walls shorn of random clusters of brick like a toothless old man’s maw - was shaking now, dust bursting from the roof in scattering spirals that glinted in the light of the last candle stub as the few remaining ragged survivors clustered there, their faces bloodied and their clothes in rags, clinging to each other in primal, vibrant fear. But for the roar above, a roar that whispered that the walls of this tunnel would not much longer shield them from swelling apocalypse above, there was silence.   Until…   “Still. It’s not all bad, is it
Post a comment
Read more
More posts